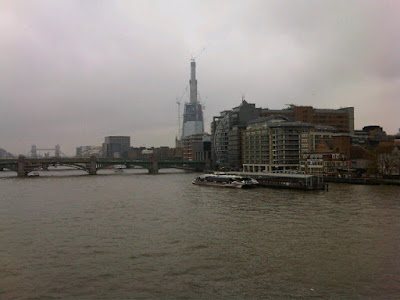 The Financial Times ran a story on November 19th, praising the redevelopment of London’s Bankside neighbourhood:

“Few places can boast a shop specialising in dog collars, professional boxing gyms and an international art gallery within a short walk of each other. But that’s what makes Bankside one of the most interesting areas of London. For years it suffered the legacy of war damage and industrial decline; a rundown riverside, empty warehouses and decrepit housing; its grimy streets overshadowed by the railway viaducts that lead to that most chaotic of terminals, London Bridge station. So close to the City of London, so near the West End, but so far away.

“Now all that is changing fast. Office blocks have shot up in the More London development and the Shard – a dramatic architectural statement that will be the tallest building in Europe – is to be unveiled in 2012.

“Nothing symbolises the area’s regeneration more than the Tate Modern, which opened in 2000,” the FT story states.

But will tower blocks be more appealing than warehouses and railway viaducts?

There is no doubt that modern architecture has a place in London, as it does in every big city.

But do we need to measure the impact of the increasing height of these buildings on London’s contemporary historic character?

The FT refers to the Shard, designed by architect Renzo Piano, and under construction behind London Bridge Station, as a “dramatic architectural statement”. The Shard will be a pointed high-rise 310 m (1,017 ft) tall (including 72 floors, plus 15 further radiator floors in the roof), entirely clad in glass. 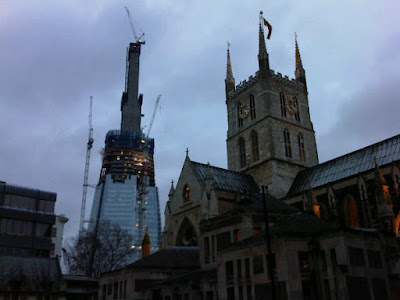 “The shape of the tower is generous at the bottom and narrow at the top, disappearing into the air like a 16th century pinnacle, or the mast top of a very tall ship,” Piano says in an “inspiration” statement on The Shard website. “The architecture of the Shard is firmly based in the historic form of London’s masts and spires.”

But since the tall ships are long gone, how will it fit in with the historic form of London’s cityscape?

As a resident of the area, I have noticed that the Shard already dominates the Bankside landscape and beyond. Much like the Norman Foster-designed Gherkin building in the City, it appears “every place and no place”, standing out like an alien structure. 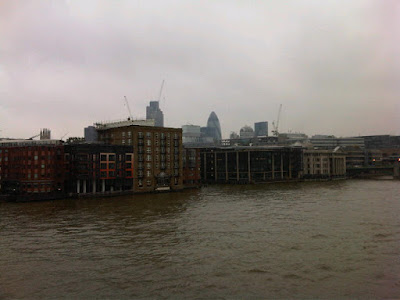 For example, The Tower of London is overshadowed by the appearance of The Shard behind it when approaching in a southerly direction from Tower Gateway to the north of the river, despite the geographical distance. As well, many of Bankside’s tiny streets are now dominated by the Shard.

The FT refers to the Neo Bankside project, designed by Rogers Stirk Harbour + Partners, as “‘a striking quartet of pavilions’ emerging alongside Tate Modern”, when in fact these four soon-to-be glass high-rise residential towers with red accents are still far from complete. 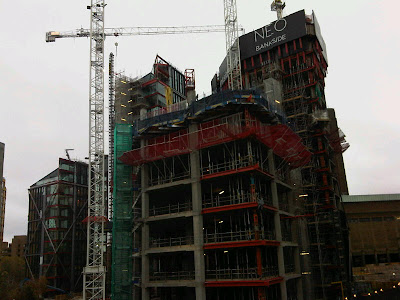 The view of Tate Modern, designed by Giles Gilbert Scott, from the St Paul’s side of the River Thames and the Millennium Bridge is already compromised because the structures jut up above it, detracting from the iconic appearance of the building. 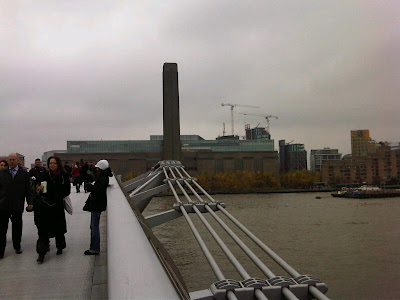 There is nothing new about glass-clad, geometric buildings. Ever since German architect Walter Gropius designed the Fagus Factory (1911-13) major architects have focused on designs using glass and steel to construct buildings.

One thought on “From Neo Bankside to The Shard”