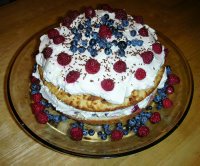 My mother is renowned for her creative cooking. This year, during the dog days of summer, she served up a spectacular two-layer blueberry-raspberry shortcake.

I wondered how a British-born-and-bred woman came to make shortcake of any kind, let alone such a splendid variation on the classic North American strawberry dessert.

I asked her if it was a dessert she had made in England before she migrated to Canada in the 1960s.

“I didn’t make it in England because I’d never heard of it,” she explained. “The first time I had it was at a party in Toronto.”

My mother moved to London by herself from a small village at the age of 14 during the Second World War. She worked as a nanny and then became a cook.

She looked after a boy in Chepstow Villas in Notting Hill for several years, but one of her most memorable employers was Bill Linnet, a theatre producer who lived in Westminster behind the Abbey. He always ensured that she and her friends got tickets to see the plays he produced in the West End. His chauffeur taught her to drive.

She joined the Women’s Royal Naval Service to become a Wren because she wanted to learn to drive a truck. She was trained in Reading and then — the same day the Queen was married on November 20, 1947 — she was sent to Greenwich where she was stationed as an officer’s steward.

She met my Canadian-born father in London in the mid-1950s when he was working as a journalist on the old Nordesk for Reuters on Fleet Street.

He had lived in a house in Bayswater where she lived and went to collect his mail. He invited her out.

She first moved to Canada some years after she married him. Before she moved to Toronto they socialized with his Canadian friends and colleagues in London.

“Canadians in London went on about the awful food in Britain,” she said, which led her to expect excellent cuisine in Canada. She was sorely disappointed.

The first Canadian food she ate was a sandwich she bought on the train from Montreal to Toronto after disembarking from the Italian-owned ship, the Homeric, which had a Greek crew.

“It was revolting,” she said. “I had a roast beef sandwich because everyone had gone on about it, and it stuck to the roof of my mouth.”

She described the party she attended upon her arrival in Toronto where she first ate strawberry shortcake as typically “suburban Canadian.”

“It was the worst night of my life,” she said. “I walked in and there were about 50—all blond—women.”

The dessert was a frozen pound cake with frozen crushed strawberries and fake whipping cream on it.

My mother grew up in a village in the south of England during the Great Depression.

My grandmother worked as a cook in big houses. One of them was called Hillview. It was owned by Cecil Wray, the former governor of the Malay States. The Wrays had made their fortune from rubber in Malay and Kenya.

She worked also for the Ash family who made their money from the cotton industry in Manchester.

My grandfather served in the Royal Navy on HMS Barham and fought in the 1916 Battle of Jutland in the First World War. His brother George was killed in the next ship in the line.

He became a gardener after he was forced to retire from service in 1935 on assignment in the Mediterranean after almost 25 years of service in many parts of the world because of a serious knee injury. He had signed up for 25 years of service at 17.  After his retirement he became a standard bearer for the Grayshott British Legion. One of his post-war duties included the upkeep of the village war memorial.

My mother’s brother, my uncle, who was 10 years older than her, served on a tank crew in the British eighth army and fought in the North African and Italian campaigns of the Second World War. After the war he worked for the post office and played accordion in a band.

Food was rationed during and after the war. Meat, butter and eggs were rationed. Everyone grew his or her own vegetables.

“Our Sunday joint was just a few ounces,” my mother said.

My grandparents kept chickens and rabbits. People in the village registered with them to get rationed eisenglass eggs, which were a type of pickled egg. When the chickens got too old to lay eggs they were used for eating.

My grandfather had a goose named Pickles that was given to him by Commander Wrightson, a man for whom he worked as a gardener at Dower House.

Wrightson helped him get a decent pension from the Navy.

“People shared food,” my mother said. “If there were a lot of eggs, people got lots of eggs.”

One of their neighbours in the village had throat cancer and everyone gave him bananas when they got them because he couldn’t eat much. They didn’t get much fruit.

My grandmother made dandelion wine and cheese.

Although the war ended in 1945, it wasn’t until the Queen’s coronation in 1953 that rations came off candy.

My mother hated Toronto the first time she lived there, but my paternal grandmother, with whom she and my father lived, was very empathetic.

My mother said it was because my grandmother, who was originally from Shediac, New Brunswick and married a Baptist minister, understood what it was like to relocate with children. She lived in several places in the Maritimes and Ontario with my grandfather who served at five different churches in five different cities during his lifetime. 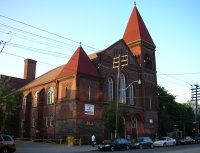 “She came from the Maritimes to Ottawa and it was a big shock to the system,” my mother said. “She left her family behind.”

As to why she started making strawberry shortcake, my mother said: “I don’t know why I made it, it was something all Canadians had. “