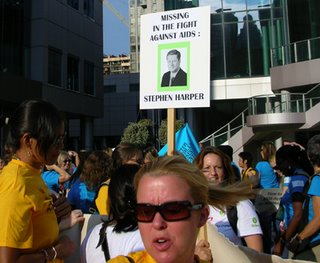 About 600 people, many of them wearing canary-yellow T-shirts with the slogan “Time to Deliver” printed on the front, rallied outside Toronto’s Metro Hall on Monday to protest the plight of women infected with HIV/AIDS.

Organizers held the rally in conjunction with the 16th International AIDS Conference to demand action against the spread of the disease among women and girls. The focus of the conference is on unfulfilled promises made by governments that would help make AIDS treatments available worldwide.

The rally echoed the theme of the conference, but with a feminist twist.

More than 20 million people have died from the disease in the 25 years since the U.S. Centers for disease Control and Prevention reported the first cases in 1981. 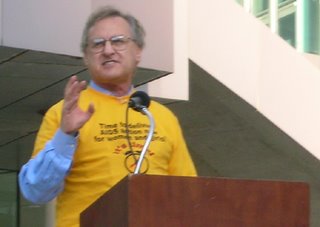 There are 17.5 million women and 19 million men over the age of 15 infected with the disease worldwide, according to UNAIDS.

More than three quarters, or just over 13 million, of those infected worldwide are women living in sub-Saharan Africa. Women are disproportionately infected, making up almost 60 percent of all HIV-positive adults in the region.

“Many things have changed over the last four to five years in the response to the pandemic,” Lewis said. “But the one thing that has not changed is the heartbreaking and grotesque vulnerability of the women of Africa to the virus.

“It remains an unconscionable indictment of the way in which international society responds to the needs and rights of women.”

The worst hit region is sub-Saharan Africa where in 2005 there were 24.5 million, or 64 percent, of HIV-positive people living.

Almost 90 percent of the 2.3 million HIV-positive children worldwide live in sub-Saharan Africa. Of those children, fewer than one in 10 receive basic support services, according to UNAIDS. Almost 12 million, or about 10 percent, of children in the region have lost at least one parent to AIDS.

At least 4.7 million people, or 72 percent, of all people who need antiretroviral treatment live in sub-Saharan Africa and only 17 percent were receiving it in 2005, according to UNAIDS.

The situation in southern Africa, where one third of AIDS deaths worldwide occurred in 2005, is also grim. A third of people with HIV worldwide live in the region, as do 52 percent of all HIV-positive women and about 43 percent of HIV-positive children under the age of 15.

The rally, like the conference, attracted people involved in the fight against the disease from all over the world. 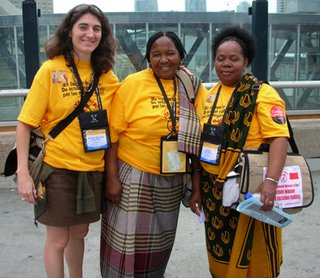 In Mozambique, national adult HIV prevalence is estimated at just over 16 percent and almost two million people were living with the disease in 2005, according to UNAIDS.

Conceica and Fernando run a campaign for HIV/AIDS and gender rights in Maputo.

“There must be equality between men and women,” Conceica said. “Men must no longer feel that they are the only bosses of the family, women must be able to feel free to negotiate safe sex.”

They want to ensure that agreements over medications to treat the virus made between governments and pharmaceutical companies are upheld.

“We came so that our own voices join with the voices of people from all around the world to ensure that we must end AIDS, and to ensure there is genuine solidarity between all different people to end the pandemic,” said Fernando ~ 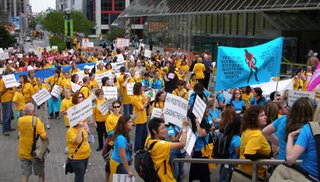 U.S. Congresswoman Barbara Lee, D-CA, spoke of the legislation she introduced in June to reduce the vulnerability of women and girls to the disease. The Protection Against Transmission of HIV for Women and Youth Act, would require President George W. Bush to address 12 key issues that contribute to gender disparities in the rate of HIV infection. 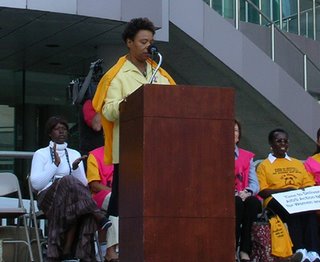 AIDS is the leading cause of death for African-American women between the ages of 25 to 34 years in the U.S., according to UNAIDS statistics.

The act would address social and cultural factors contributing to women’s vulnerability, such as lack of access to prevention methods, the stigma attached to HIV, as well as discrimination against women and lack of education, according to a press handout on Lee’s Website.

The bill would amend an act from 2003, which focuses on “abstinence-until-marriage” programs. Proposals include increasing access to female condoms, reducing violence against women, coordinating HIV prevention services with existing health care services, promoting gender equality and encouraging the creation and enforcement of equal rights for women.

Mary Robinson, president of Realizing Rights, spoke about the need to unite women fighting against AIDS with women involved in the feminist movement to create powerful leadership that could generate effective change. 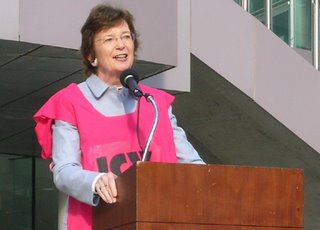 “What I have learned is that women are giving leadership, they’re fighting back, they’re doing it in very difficult circumstances, in poverty, with many barriers, and their courage and their resilience is truly remarkable,” Robinson said. “The problem is that they are not the decision makers on the legislation, on the policies, on the programs.” ~