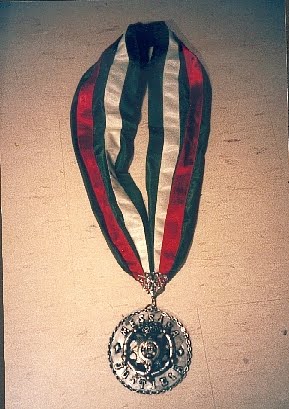 The comedic police constables Dogberry and Verges are awarded medals at the end of “Much Ado About Nothing.”

I made two of these on short notice, but I admit I did not sew the beautiful ribbons together. My colleague Polly did. Actor Stephen Ouimette played Dogberry and Brian Tree played Verges.

In order to make the two medals, I went to the Stratford toy shop and bought beads in the shape of letters. I cut two disks of thin aluminum and i drilled holes in each of the letters and around one of the disks and “riveted” the letters in place using earring findings. They read “Messina Justicia”.

I drilled holes and using thread wire attached a toy sheriff’s star onto the disk upside down (a theatre trick is to use a familiar shape upside down so the audience can’t see it properly and figure out what it is, but it reads as a type of the real thing).