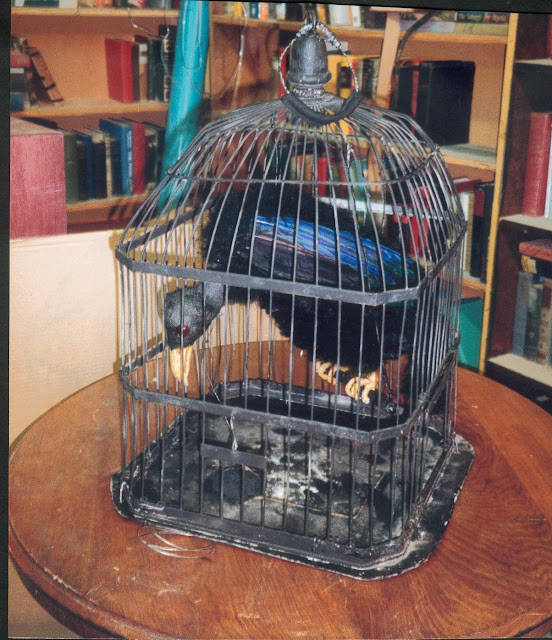 This is Fagin’s pet bird from a production of Oliver. I made the vulture puppet.

I bought the cage at an antique store in Rideau Ferry, Ontario, which is about a half hour drive from the Thousand Islands Playhouse in Gananoque on the St. Lawrence River.

This prop required a lot of thought and planning ahead to ensure it would work.

I made changes to the heavy-duty cage so that it would be lighter for the actor to carry on stage. I also fixed it so the bird’s head could bob up and down. I cut the edges off the tray with a large pair of tin snips and smoothed them off with a file. I drilled holes around the edges so I could “sew” the smaller base onto the base of the cage with wire.

I drilled into the centre of the cage base to create a hole. I used the small hole to create a larger hole with a saw so the piece of wire I had attached to the articulated vulture’s neck could be manipulated by the actor.

I had put a small screw eye in the wood on the vulture’s neck so I could attach a piece of wire and when pulled down by the actor through the hole in the base of the cage it would give the appearance of bobbing.

I covered the hole with a piece of black leather with a cross shape cut in it so it wouldn’t be visible. I used contact cement to glue a thick piece of leather around it to conceal the hole. I had cut slits in the leather so the wire could move.

I worked from a painting drawn by Kairin Bright, the designer, to draw an outline of a vulture’s body on two separate pieces of quarter-inch thick luan — an extremely lightweight poplar wood — and cut them out on the band saw.

I cut two more pieces of the wood the same shape — but not as long — to sandwich between the other pieces and hold them apart. I did that so I could create a silhouette of the head with a long neck; and fit it so that it would slide up and down between the exterior pieces. 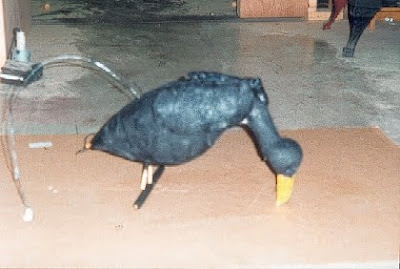 Unfortunately, I don’t have a picture of that stage of the proceedings scanned, but you might get the idea by looking at the picture above. I had to add two pieces of wooden dowel for the legs and drill holes through another piece of dowel so they could fit into the swing I created in the cage (using dowel and wire).

I also attached wire — the long pieces are visible on the bird’s back in the picture above — so there would be a means of attaching the bird to its swing from the body without ruining the look of the bird.

To attach the head and neck piece, I had drilled holes through the exterior pieces and the head. I stripped the centre of a screw post by filing it down so it would be smooth and bolted the pieces together. It allowed the head to slide up and down.

I cut blocks of dense styrofoam and used spray contact cement to glue them to the luan — one piece on each side. I then sculpted them with a sharp blade into the shape of a bird’s body, filed it down first with a coarse wood file, then with a smooth one, mixed black acrylic paint into flex glue, dipped strips of muslin gauze into it and stuck it over the foam to strengthen it.

I did the same thing with the head, but also carved the beak using a sharp blade and left indents so I could glue in the eyes, which I bought at a craft shop in Kingston.

I shaped and taped paper into the proper shape for the wing armatures. I bought black fake fur to give the effect of feathers on the body and used actual died feathers on the wings. I glued the fur and feathers on with contact cement. 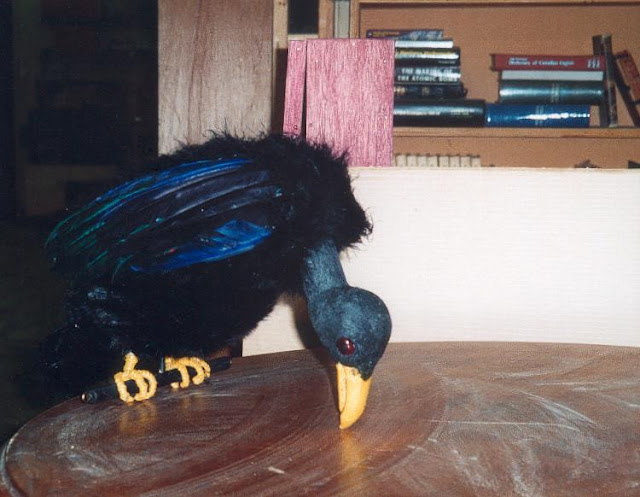 The claws are wire wrapped in string dipped in a mixture of water-soluble contact cement and yellow paint. I glued the bird onto the swing bar and put screw eyes into each end of the dowel. I then attached the wire so the bird would be free to swing in the cage.

It was quite a heavy-duty prop, made to withstand actors’ shenanigans backstage in a theatre without a proper, protective stage crew. 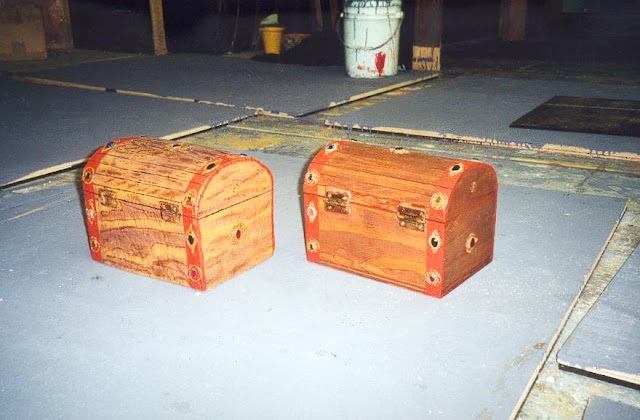 One of these boxes is a real wooden box, painted and with gems added. The other one is faux — a carved chunk of styrofoam, covered with paper mache painted to look real, with the same kind of gems pasted on it.

It is Fagin’s treasure box, but he needed to throw it off the balcony in one scene, so I had to create a fake that wouldn’t fly open, hurt anyone or break if it hit the deck instead of the waiting hands of Fagin.

I cleaned up and repainted the real one and added the gold metal findings and the jewels, and then did the second one so that the audience wouldn’t realize it was a different box. The metal surrounding the gems on the faux box is hot glue painted with gold paint.