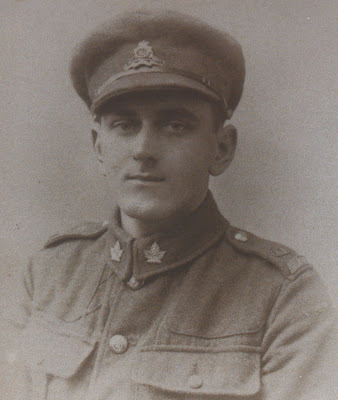 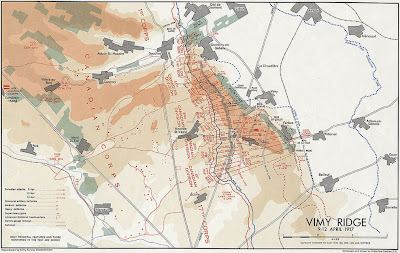 Carrying ammunition to the No. 4 gun all day. We are getting a reserve store ready for the “strafe” which “comes off” in a few days. Aeroplanes very active today.

On duty at the guns all day. Did considerable firing. Mailed letters to Walter Ryder & Grandma and Grandpa Duncan. A “Fritz” plane brought down one of ours, in flames, this evening. He then came right over toward our battery after another, but was driven off by our planes.

On ammunition fatigues all day. Did considerable firing. Had to take a count of all the shells et cetera. A “Fritz” plane brought down one of our observation balloons this morning. It came down in flames. Letter from Mrs. Blackmore this evening & Easter cards from Mrs. Morton and Marcella Mollins of Moncton. On the guns all night. Fired 123 rounds.

Easter Sunday and a beautiful day. Nothing of importance happened. A few German shells dropped around the position. Our infantry goes over tomorrow in an attempt to capture Vimy Ridge. Expect it will be a big day.

On fatigues all day. This is the day of the big “strafe.” There was a heavy bombardment at 5:30 a.m. and the infantry went over from Vimy Ridge to the right. Large numbers of prisoners and guns were taken. Vimy Ridge fell into our hands. Parties of prisoners passed our position all day. All seemed glad to have been captured. Our casualties were not very heavy. Nice parcel from mother this evening containing fountain pen, cake, candy, etc.

On the guns all day. Very quiet this morning. We started firing about 11:30 A.M. and from then till six fired 215 rounds. The infantry went over again this afternoon & gained their objective. More prisoners & guns were taken. The reports are very encouraging, in fact, too much so. However, everybody is very happy over the good results. “Fritz” put quite a few shells quite near our position today.
USA has entered the war on the side of the Allies.

On ammunition fatigues today. Had an easy day. “Fritz” shelled quite heavily today. Everything is still going favorably for us. Everyone is jubilant. We expect to be moving forward in a few days. On the guns all night. No firing up till twelve o’clock. Snowing very heavily this evening. “Fritz” shelled in this vicinity.
An ammunition dump of the No. 2 “Heavies” was blown up.

We were called out at 3:30 A.M. and fired twenty rounds. At 5 A.M. there was a twenty minutes “strafe.” It was snowing and blowing something awful & very cold. Our infantry went over & gained their objective, and captured 600 prisoners. Off duty all day. It is reported this evening that 12,000 prisoners have been taken south of Arras, also 400 guns.
USA has declared war on Germany and severed relations with Austria. It is rumored the Argentine & Brazil are at war with Germany & have seized all Hun shipping in their ports.

The following morning, the Canadian artillery unit began moving a few kilometres to a battlefront near the villages of Souchez and Carency, where, on Monday, April 16, the Canadian gunners re-engaged German artillery. The diary says:

“While we were firing the Huns burst two shrapnel [shells] right over the gun. No one was hurt. Spent the night in an old cellar, which we cleaned out. We dug up two skeletons in the debris.”

That evening, the diary notes, he received another Easter greeting card from home. It was to be almost 19 months before the war ended—on Harry Mollins’s 23rd birthday.

Back home in Moncton, he worked for a time as manager of the furniture section of the local Eaton’s department store and polished his reputation as a baritone soloist in the city’s Baptist church and other choirs.

In the 1920s, he married Vera Grace Nickerson, gained B.A. and B.D. degrees at Acadia University in Wolfville, N.S., and became minister of the Baptist church in nearby Windsor, N.S.

3 thoughts on “Account of the Battle of Vimy Ridge”