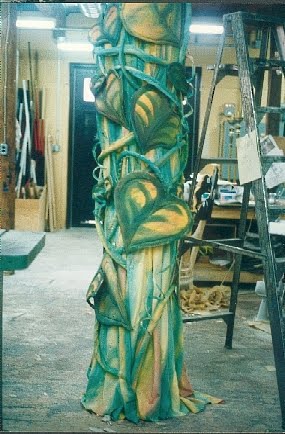 The beanstalk for Into the Woods had to collapse into a hole in the stage and “grow” during the show.

Jules Tonus painted the fabric, which conceals the armature, before we started building the set piece.

To construct it, we worked from a blueprint drawing. The prop shop at Canadian stage was an old stable, so there was a trap door in the ceiling. We strung it up on a winch so we could work on the upper level in the old loft and also down in the main workshop.

We measured and cut large discs of wood from plywood on the band saw and screwed them to the table in the workshop to use them as armatures. I made giant hoops of plastic by using a heat gun to shape plastic rods about half an inch in diameter around the disks. Each piece of plastic overlapped by a few inches and I drilled holes to thread wire through and joined them together.

I then strung the hoops, which got successively smaller toward the top of the beanstalk, together with window sash cord using simple hitch knots. In this case, the blueprint drawing was not very good. The angles of the hoops in the drawing were impossible to match, but I had to prove it. 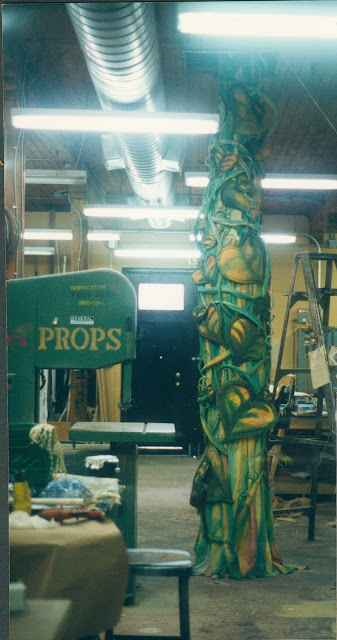 I cut the leaves out of foam rubber and cut the cloth shapes to “upholster” them. I tried using spray contact-cement glue to stick the fabric to the foam, but it didn’t work properly, so I had to also sew them on the industrial sewing machine.
The small vines were made using a material called ethafoam. It is the same material as the “noodles” people use in the water to help them float and is available in different sizes.
I cut the fabric into strips and sewed long “socks” to slide the foam into. The smaller tendrils were created the same way, except the fabric covers piano wire — wire that can be bent using pliers, but that keeps its shape (it has memory as opposed to other wire, which is easily bent by hand) and doesn’t get distorted.
The rest of the fabric was sewn together in panels and draped around the hoops, then I used hot glue to stick all the vines, tendrils and leaves onto the main armature. 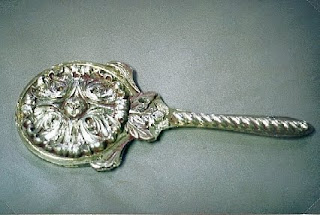 This is the back of a mirror. Into the Woods was done in baroque style, I cut a shape out of lexan plastic on the bandsaw and then stuck bits and pieces of wood and plastic onto it. I painted it a rust colour first and then gold, leaving the red hue showing through to give the object greater depth and richness. I used gold leaf to create another range of highlights. It is about 14 inches long. The other side had a mirror on it. 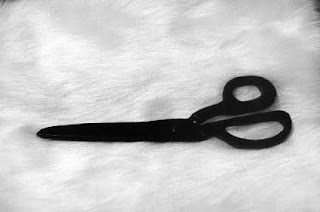 Unfortunately, I took the picture of the black scissors on a white background so they are difficult to see. They are also over-sized and made of Lexan (bulletproof) plastic. I modeled them on real scissors, so they had a hinge made with a nut and bolt. I stripped the bolt (filed it smooth) so the scissors could “snip” freely.