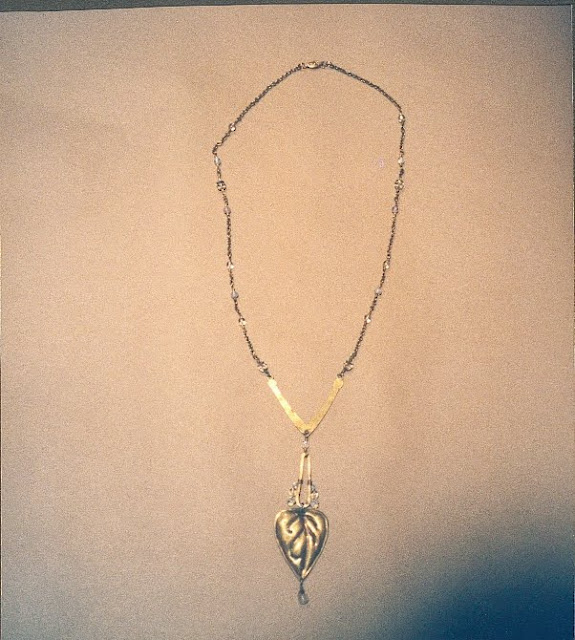 I made this necklace for Madame Ranevskaya (played by Martha Henry) based on a drawing by Astrid Jansen, the designer. It was not easy because it had to be big enough to been seen from the audience, but it had to look elegant and authentic. It also had to be smooth so it wouldn’t catch on the frock.

I used brass sheet and cut out the main shapes using a jewellery saw. I used a bastardized repousse technique to hammer out the dimensionality of the leaf. I drilled a hole in the base and added the wire so the bead would dangle. I put beads on wires, incorporating them into the chain.

I used French Enamel Varnish for break down, otherwise it would have been too shiny under the stage lights. FEV is a combination of shoe dye, methyl alcohol as a thinner and shellac as a binder.

The main problem with the construction of this necklace was that it made a slight clicking noise when the bead moved around on the tip of the hollow leaf. I was asked to make it silent which was difficult given the desire for authenticity. In the end, I opened it up again and filled it with epoxy glue. It didn’t make it much heavier.

(In March 2010, I visited the Moscow Art Theatre where “The Cherry Orchard” was first performed in 1904, directed by Constantin Stanislavsky.)