This story was written for the Grayshott Parish Magazine and published in November 2009. 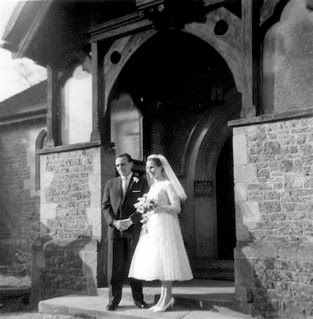 Some of my earliest childhood memories were generated in the small Hampshire village where my maternal grandparents lived when I was a child.

A recent bittersweet return visit to Grayshott after a 20-year hiatus was a bit of a disorienting experience, which highlighted the complexities of remembrance and reality.

My grandparents, Herbert and May Levett, lived at “Bidston” on Crossways Road. 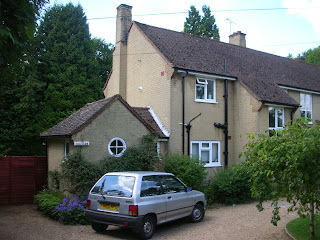 Their daughter, my mother, Joan, married Carl Mollins, a Canadian journalist working in London with Reuters, the news agency, 50 years ago on March 21, 1959, at St Luke’s Church.

A clipping from the weekly Hindhead Herald newspaper dated March 28, 1959, describes the event:

“The vicar (the Rev. Dr. A. R. Winnett) conducted the wedding service, during which the hymns ‘Lead us, Heavenly Father,’ and ‘Love Divine‘ were sung. Given away by her father, the bride wore a short full-skirted white lace dress with long fitted sleeves extending in points over the hands, a coronet of orange blossom, and short veil and white satin court shoes.  Her bouquet was of roses, freesias and hyacinths in spray form.” 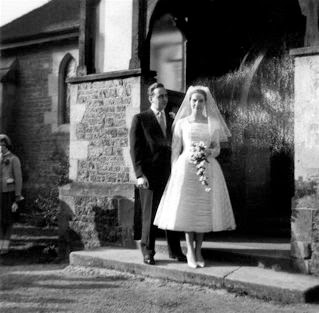 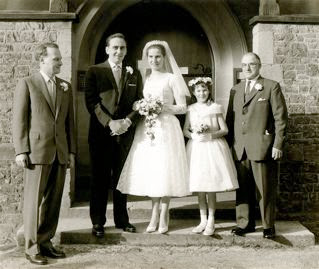 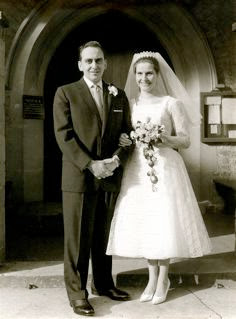 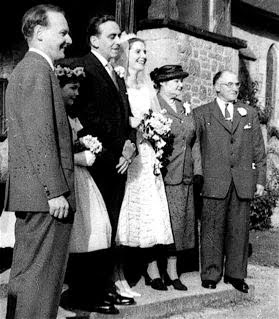 We moved several times when I was a child, which meant we lived in London for only three years before we returned to Canada, where, apart from four years in Washington, D.C., I spent most of my life.

It was an easy trip from London to Grayshott by train and we often visited my grandparents. A cosy, loving atmosphere warmed their chilly home, which was always surrounded by the scent of a bonfire burning rubbish in the garden.

Inside, my sister Tracey and I whiled away the hours by looking at the multitude of ornaments in parlour and sitting room, while outside, we played in tents and with what seemed like a vast amount of plastic garden gnomes and animals.

I also remember the trauma of such outdoor threats as being jumped on by a dog while I was being trundled along the sidewalk in my pushcart.

In an odd twist of fate, since October 2008, I have been working at Reuters in London as my father did, just down the street from where he worked on Fleet Street.

I took a trip back to Toronto, where my parents and sister now live, in March and helped arrange a party for their Golden Wedding Anniversary, which about 50 friends attended.

Returning to Grayshott in recent weeks was a melancholic experience in some ways because my grandparents have passed away, Bidston’s garden has been irrevocably changed and the war memorial and green, which my grandfather tended after he retired from Naval service, has been altered with a fence and children’s playground. 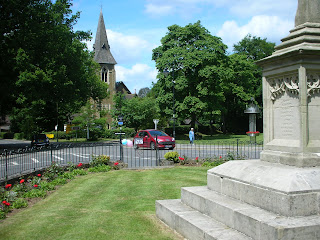 Everything seemed odd as I wandered around the village trying to piece the past together.

I met for a delicious Sunday dinner at the Fox and Pelican pub with Marie Morris, a lifelong friend of my mother’s, who visited us in Toronto several times. 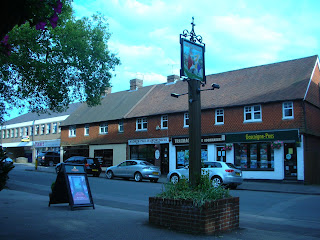 We went for a walk to the Grayshott Pottery and to see the school they attended. 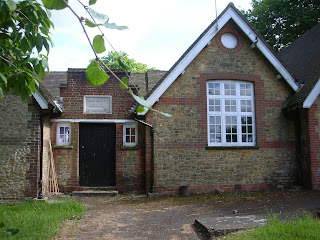 In St Luke’s Church, I was intrigued to find the names of relatives on plaques commemorating those villagers who served in both world wars, and most importantly, I was glad that my visit brought to life the building featured in many pictures of my parents’ happy wedding day on display  throughout their home. 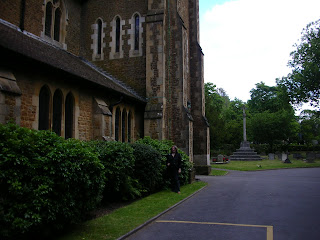