I went to Bayswater today to meet a friend. We walked through Kensington Gardens to the Victoria and Albert Museum to see some Chinese robes.

In the park we saw a flock of feral parakeets, rumoured to have been released during the filming of the African Queen , directed by John Huston and starring Katharine Hepburn and Humphrey Bogart, at Isleworth Studios in 1951. 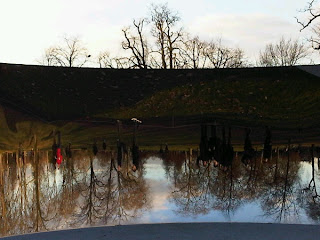 We also saw sculptures by Anish Kapoor placed throughout the park as part of an exhibit at the Serpentine.

The parakeets and Kapoor’s reflective sculpture gave the park a futuristic flavour.

The exhibition of Chinese robes at the V&A is in the same display space as was The Supremes exhibit in 2008 and the Grace Kelly exhibit a year later. Like those shows, which attempted to show the fashions of the times, there was not much context provided.

There were no graphs showing the historical trajectory of the emperors, empresses and concubines who wore them. No explanation as to how they were worn or who wore them, nothing about why these particular robes were on display.

Afterwards we took the 70 bus back to Bayswater and had red wine and dinner at the King’s Head pub on the Moscow Road in Bayswater. It’s my old childhood neighbourhood.

As I walked through the bit of park behind the Tate Modern towards home, I heard a bird I’ve encountered before singing away in the dark. This time I saw it up in the trees. A black bird with a glorious song. It seems bigger and blacker than the nightingale.

After I got home, my friend texted me to say it is the anniversary of the beheading of King Charles I on Jan 30, 1649.

He was born on the 9 November 1600, tried, convicted, and executed for high treason after the second of two civil wars that occurred during his reign from 1625 to his death.

Afterwards, during the Cromwellian Interregnum, England became a commonwealth and the monarchy was not reinstated until 1660 when Charles I’s son Charles II took up the post.