May 12 marked the 10th anniversary of the death of a very good friend.

In honor of that anniversary, I have transported to this website a blog post I wrote two years after he died and published elsewhere. It is not only about his death, but it is about the death of another friend.

Glenn Gibson and Mary Ann Miller had something in common. They both committed suicide.

Actually, they had more than suicide in common. They both worked at the Art Gallery of Ontario in Toronto where I also worked many years ago and where I met them.

I still live with items they gave me. My Mexican drinking glasses sit on tea towels from Mary Ann, I keep a black silicone heat-resistant mat she gave me on my breadboard.

From Glenn I have many creative oddities on display, including a necklace with a pendant made from a doll’s arm spray-painted gold, a bat necklace, a chicken bone painted black and gold and partly wrapped in foil, a silver cut-out heart in a box, a picture of a man playing the cello signed on the back: “G n Charlie” (Charlie was his dog). I also have a purple bathmat he gave me, which is not currently in use. I have other gifts and cards from Glenn hidden away in boxes.

After he died, Mary Ann used to talk about having a retrospective of his work.

Since I moved to Mexico I am often reminded of him because he loved death imagery, which is very popular iconography in this country. My first real introduction to it was when I visited him for a week in New Orleans. 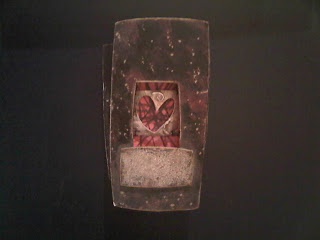 A friend of mine killed herself a few weeks ago. I knew her for about 20 years. We met at the Art Gallery of Ontario where she organized special events and functions. I was a waitress in the member’s lounge.

The day I found out she’d killed herself, I saw this graffiti in Philosopher’s Walk near the Royal Ontario Museum in Toronto. I wondered how many people would share this sentiment: “Open up your eyes and realize there’s no better place than here, there’s no better time than NOW.”

Mary Ann would visit the member’s lounge for a glass of wine after she finished work on Wednesdays — the one day of the week that the gallery stayed open late. We liked each other, but we didn’t socialize.

We were both very good pals of a talented, yet troubled, artist friend who killed himself in May 2005. I also met him during the two years or so when I worked at the gallery. Glenn was a waiter in the restaurant and a gifted jeweller and artist.

The two spent a lot of time together. She was an excellent friend to him.

She was laid off after 25 years or so of working at the gallery. He killed himself on her last day on the job.

He was quite ill physically and was suffering from depression. He was an alcoholic and abused drugs. He threw himself on the subway tracks at the Queen Street subway station after checking himself out of St. Michael’s Hospital.

The last time I saw him he was so high that he could barely speak. We went to see the film “Ray” at the Bloor Cinema and he passed out and slept through the entire movie. He phoned me at about 1:30 a.m. to apologize.

We tried to meet again a couple of times, but he never showed up.

He had tried previously to kill himself. I had intervened and taken him to the hospital on one occasion. I had also helped get him out of jail when he got into a mess while holidaying on the Caribbean island of St. Eustatius.

After he killed himself, Mary Ann and I got together from time to time.

I hadn’t heard from her for quite a while, but I sent an email to her husband about a week before she hung herself on her back deck.

Apparently, she left no note, but had been suffering from insomnia and anxiety.

Her memorial was held while I was away in England.

While I was in London I saw an exhibition of the work of John Everett Millais at the Tate Britain. His romanticized image of Ophelia after she killed herself is shown below.

These are not the first friends I’ve known who have killed themselves.

A long time ago, when I lived in Ottawa and was in Grade 8, a friend killed himself while sniffing glue.