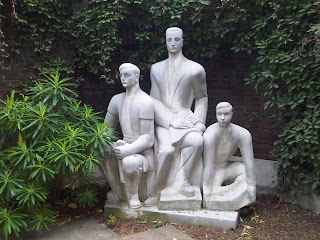 I was looking for this sculpture on this dark day for journalism — the final day of publication of London’s “News of the World” newspaper after scandalous revelations.

The Portland stone sculpture is Britain’s only public monument to newspapers, according to the plaque beside it, representing aspects of newspaper-making, a newsboy, a printer and an editor.

It was originally in New Street Square, commissioned by Westminster Press Group, moved in 2009 by the Goldsmith’s Company, freeholders of New Street Square, and placed in the Company’s garden on Gresham Street, following redevelopment of the square.