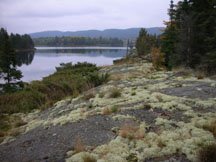 Getting to Leech Lake from Toronto is a bit of an odyssey.

The drive to Espanola takes about five hours, the motorboat portion of the trip takes about half an hour, hiking through swampy bush takes about 20 minutes and rowing takes another 20 minutes. 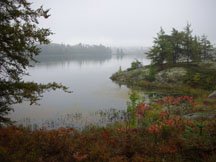 It’s necessary to take everything that will be needed, but no more, so that the knapsack isn’t too heavy to carry.

Planning the trip in the fall when the forecasts show rain and very cool temperatures is tricky because it means lugging gear for different types of weather. 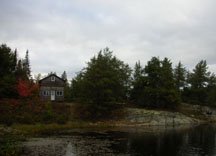 I took a protective anti-bear jingle bell—just in case—because hunters bait the bears on the path through the bush.

The driving was good, and the journey on the way there was pretty uneventful, except that I parked in a spot designated for parents and children at the grocery store in Espanola. 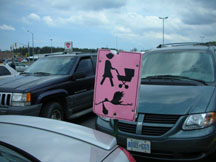 The weather was cloudy and wet at the cabin except on the last night when it was clear enough to have a campfire and see the Milky Way. 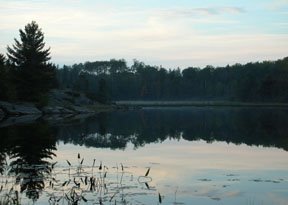 The loon swam on the lake calling out in its distinctive, haunting cry. Apart from that I didn’t see much wildlife except for a rabbit and some migrating birds. 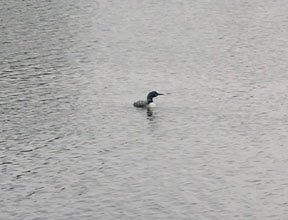 A goldfinch flew into the cabin window and dropped dead on the ground.

Honking Canadian geese flapped over the island one afternoon, but gunshots rang out and the birds fell silent.

I found the skull of a small animal and the lower jaw of another animal while tramping around the island. 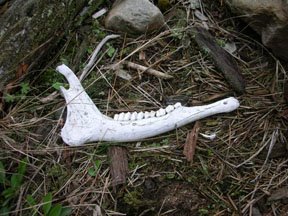 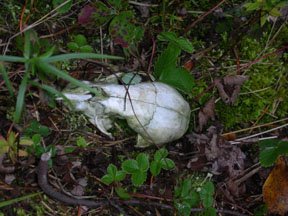 I saw a late-season frog hopping and a dead fish floating in the lake.

There were a few tired old mosquitoes buzzing around making half-hearted efforts to pierce through human skin for fresh blood.

I managed to thwack each one of them and remained unscathed.

The return to civilization was trickier because of the high winds and rain. ~