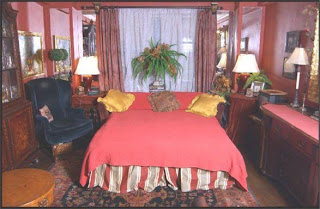 In my experience, most bed and breakfast owners love to regale their paying guests with long tirades about their travails—business or otherwise—over breakfast.

That’s why I usually avoid B&Bs and stay in hotels when I travel.

My most recent B&B experience occurred in April 2006 when Reuters sent me on an expenses-paid trip to New York City for a week of boot-camp training. I decided to stay four extra days at my own expense. Extending my stay seemed like a good way to maximize the value of a free plane ticket.

It proved more difficult to find affordable accommodations than I expected. I was surprised at how much more expensive New York City has become since I was last there in 1997.

After exhausting the leads on several “cheap hotel-room” websites, a some guidebooks and suggestions from friends, I followed up with a couple of B&B organizations.

The cheapest non-B&B alternative I had found was a $90 per night hotel room in Midtown Manhattan that would require I share the bathroom with the occupants of two other guestrooms. It sounded a little sketchy. Especially after the woman at reception in the hotel said: “I don’t think you want that.”

The B&B I settled on was what turned out to be a fold-out chesterfield in the living room of a one-bedroom apartment in a 1930s apartment building a few blocks from Macy’s for $110 a night. It was the cheapest one I could find without pets. (See picture above).

There was no door on the room, just a curtain and a screen. The room was done in a very lush Victoriana style with a lot of pink fabric, Turkish carpets, heavy antique furniture and curios.

Reuters booked me into the Club Quarters Hotel on West 45th Street for the training period.

The training consisted mostly of speakers explaining their news beats and practising story writing. The attendees included print and television journalists from other North American Reuters bureaus. We attended a panel talk one evening about news media coverage of Iraq and, on another, a dinner at Trattoria Dopo Teatro on West 44th Street. One evening I went out for a fancy Greek dinner at Avra Estiatorio on East 48th Street with a friend from high school.

The day after boot camp ended, I went to the Guggenheim Museum, which was completely clad in scaffolding as it is undergoing exterior restoration work, and saw the David Smith centennial sculpture retrospective. I liked the Wassily Kandinsky paintings in the permanent collection.

I saw the Edvard Munch exhibit at the Museum of Modern Art. His work is somewhat formless unless the image is graphic. It reminded me a bit of the formlessness of Paul Gauguin’s work, but it’s not nearly as good. The footprint of the MoMA redesign is somewhat confusing. At times it was difficult to find a direct route through the various galleries, which made it hard to know if I’d missed anything.

The biennial at the Whitney Museum of American Art, which I went to after brunch at Vento on Hudson Street, included some interesting work. I went quickly through most of the galleries, but spent a lot of time looking at the Kenneth Anger video and photography.

I especially liked the display of Alexander Calder’s “Circus” (1926-1931) in the Whitney permanent collection. There is an accompanying video loop of Calder playing with the circus characters.

I wanted to see a painting by Jay DeFeo entitled “The Rose” (1959-1966) because I like Bruce Conner’s film entitled “The White Rose” (1967) which eulogizes the complicated job of removing the painting from DeFeo’s San Francisco apartment to the melancholy tune of Miles Davis’ “Sketches of Spain.”

Last September I went to see it at the San Francisco Museum of Modern Art only to discover that it wasn’t there. It is now in the Whitney’s permanent collection. I was surprised that none of the staff on the main floor information desks or in the bookstore knew about it, but even more surprised that none of them looked it up for me. I ended up asking a security guard in one of the galleries who told me it had been on show, but is no longer.

I was escorted into a black market purse shop on Canal Street. There were lots of Prada and Gucci knock offs. I bought a Prada for my Aunt Beulah who couldn’t seem to understand it was a fake. Some men on the street offered to sell me a fake Rolex watch for $500.

I went on a paid tour of the United Nations building. The U.N. tour guide said that Canadian artist Henry Moore made the bronze sculpture standing outside the building. I did not bother pointing out that Moore is actually from Britain. However, when the tour guide later referred to U.N. troops in Afghanistan I pointed out that those troops are really a U.S.-led NATO force. He acknowledged it is true and then explained the role the U.N. is playing in the region.

The paid tour did not include a viewing of the tapestry of Picasso’s “Guernica.” I was curious to see it because I saw the 1937 Cubist anti-war painting long ago at a MoMA Picasso exhibit.

The painting depicts the aerial bombing on April 27, 1937 of the Basque city of Guernica by the German Luftwaffe, which killed some 1,600 people during the Spanish Civil War. It was commissioned by the Spanish Republican government for exhibition in the Spanish Pavilion during the Paris International Exposition in 1937 to commemorate the first intentional aerial bombardment of civilians.

The tapestry, which hangs outside the U.N. Security Council, became the centre of a controversy in Feburary 2003 during the lead up to the U.S. war in Iraq. It was concealed from view by a blue cloth and a row of flags when then U.S. Secretary of State Colin Powell presented the U.S. case for war. U.N officials denied charges of a “cover up” when a dispute arose over whether the concealment of the tapestry was politically motivated.

I managed to get in touch with someone in the U.N. building who took me to see the tapestry. He also showed me the delegate’s bar and said it is known as the Star Wars Bar because the delegates wear their national dress when they go for drinks.

I saw only one play—”Rabbit Hole”—recommended by some friends who said it was the best play they’d seen, and they said they’d seen everything. It was good, but not great, not worth $90 and the theatre was freezing cold. The script was a little weak and wasn’t helped by some not-so-great acting. It’s since been nominated for a Tony Award.

After the play, I went to the Blue Bar in the Algonquin Hotel and watched a diminutive, stooped man billed as the oldest bartender in New York City work while I sipped a $14 mojito. He’s said to be in his 90s. I wanted to go to the Algonquin because I was wearing the pearl necklace of the wife of Canadian Press journalist Al Colletti who was one of my father’s friends. My parents went to his wife’s funeral in New York City some years ago and he gave them her necklace in the Blue Bar.

THE BED AND BREAKFAST

The B&B I stayed in turned out to be OK, although I was victim to the usual B&B-owner complaints. The host is in her 70s and said she hasn’t worked for more than a year because of ageism.

There were dead cherry blossom boughs in enormous vases in the room.

“Unfortunately, you’ve missed the full bloom of the blossoms,” she said almost wistfully. But I think she may have gotten them out of the trash somewhere. They were a bit of a hazard. I got one of the branches caught in my hair as I walked by and just managed to save the vase and boughs from pitching to the floor.

When prompted, she told some rather horrifying B&B tales. She said she would tell future guests about how I don’t eat eggs or drink coffee. “You certainly burned the candle at both ends,” she said disapprovingly the morning before I left.

That morning there was an insect floating on its back in my orange juice.

I left her a bouquet of bright pink, turquoise and blue daisies and some gourmet jelly beans done up in a bag with real ribbon to try and earn some positive spin in her future tales ~