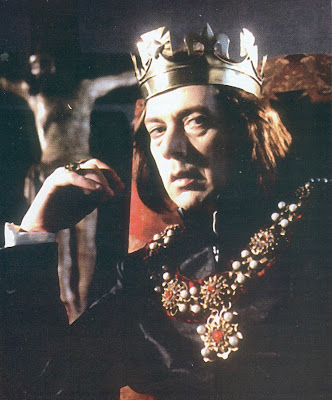 Richard III is one of my favourite plays.

For this production, among other things, I designed and created the pendant to match the chain of office actor Stephen Ouimette is wearing in the picture above as Richard III (from the Stratford Beacon Herald newspaper).

I also made the rings he is wearing and designed and created the choker below worn by Joyce Campion as the Duchess of York.

The set and costumes were designed by Patrick Clark.

The chain of office with pendant appeared on stage again in a 1996 production of Henry IV and was part of an exhibition in Stratford. 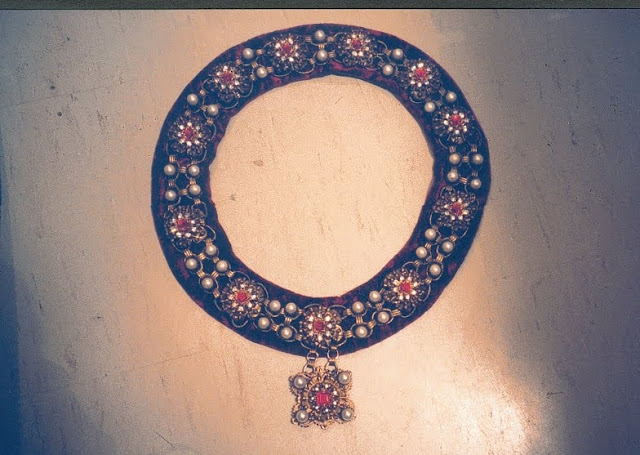 To make the pendant, I had to consider the overall design of the chain of office. I needed to make it sufficiently similar so that it didn’t stand out as an add-on, but it also had to be in keeping with the aesthetics of the rest of the piece.

I chopped some brass findings into sections, drilled holes where appropriate and sewed them back together in a square shape with wire. I glued over the wire with a dab of epoxy to stop it from slipping. Using a square shape tied the aesthetics of the pendant into the square formations made by the pearls in the original chain and enhanced the luxuriousness of the piece.

I stacked some other brass findings on top and set the red gem in a flattened bead cap. I wired it all together and glued the gem in place with epoxy glue. I “set” and wired the pearls into bead caps and then wired those onto the pendant. I dabbed a bit of glue underneath each rounded bead cap to ensure it wouldn’t shift. I had polished up the original pieces with Brasso and so I don’t think I used any break down technique to dull it. As I recall, we wanted this to be shiny and bold. 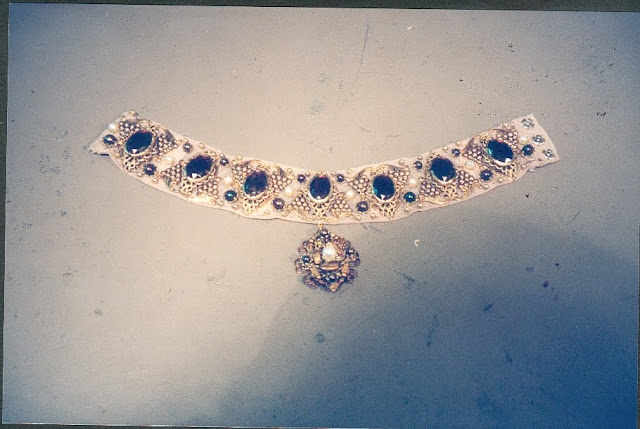 I sewed the choker pieces onto the fabric so that it would be comfortable to wear on stage and also so the individual gems would stand out and be more dramatic. The backing barely showed onstage. The designer provided some choker pictures from the era for general reference, and said he wanted it to be chunky.

I used brass findings that had a lot of relief to create texture. I also bent the findings under the gems that I stacked on top of the grape shapes to add depth.

I laid this out and he looked at it and approved it before I made it. The gems were amethysts, but he wanted them to be an eggplant colour, so I died them with French Enamel Varnish (mixed from leather dye, alcohol and shellac).

The procedure for putting the findings together by drilling holes where necessary and wiring with thin brass wire is always the same for these pieces of jewellery. I broke down the texture of this choker with FEV to give it an antique look. I sewed snaps on it as the means of doing up.

It had to be fitted properly for comfort and visual effect, which was done during costume fittings. Actors had three fittings, so everything had to be ready by the second fitting and fit properly by the final.

Otherwise, there would be notes on the piece and it would come back with notes for alterations during dress rehearsals or previews. 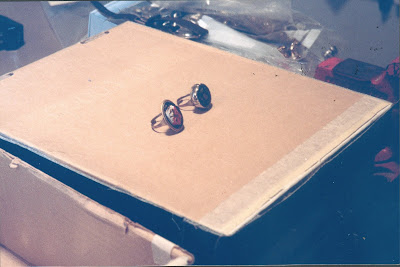 For these rings I think the designer chose buttons he liked and I wired them and glued them onto pre-made adjustable brass ring bases. The black one I wired to a plain “gold” wedding band to make it heftier.

We had a book in the bijoux room with finger sizes for most of the actors so we would adjust them to what was hoped to be the correct size before the fitting.