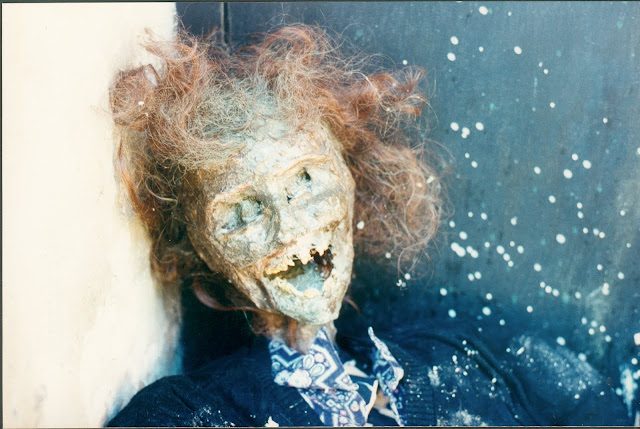 These bodies — I think about 10 in total — were for “The Monument”, a play making reference to the atrocities of war.

The mother of a woman raped, murdered and dug up from a mass grave confronts her daughter’s murderer as he is about to be executed by electrocution.

Needless to say, it was a very macabre experience working on this play. I did much of the work on the bodies, using a book of photographs from Bosnia in the 1990s provided by the designer, Charlotte Dean, as reference.

Basically, the bodies are giant puppets. The heads are styrofoam — the ones seen in hat shops — melted a bit, gouged, covered in gauze muslin for strength and tissue paper dipped in flex glue mixed with paint to create the right texture and appearance. The hair is from old theatre wigs (real) hair, and the teeth are smashed wind-up teeth with the mechanism removed. Fortunately, a colleague added the teeth and smashed up the heads. 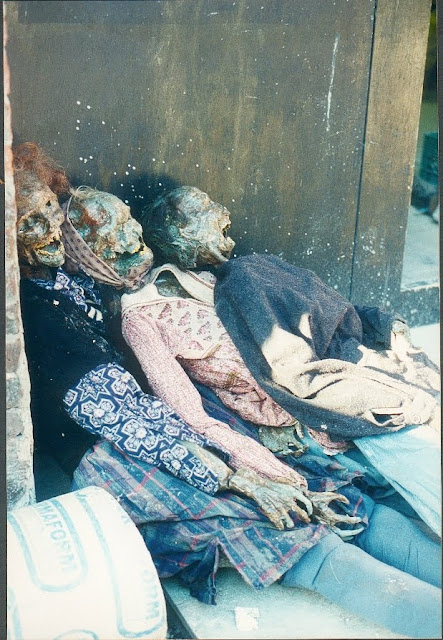 For the bodies we needed to make armatures. I traced a large outline of a body on thick craft paper and then patterns for shapes for the rib cage, pelvis, forearms, upper arms, thighs and calves.

I then traced the shapes onto pieces of quarter-inch thick plywood and cut them out on the band saw.

I cut giant chunks of styrofoam out on the band saw to glue to each side of the piece of plywood with contact cement spray glue. I then carved the styrofoam to look like the appropriate body part.

My colleague cut long pieces of thick rope, which served as a spine. We used the pneumatic stapler to attach the rope to the pieces of breast and pelvis to hold them together. The gap between the rib cage and the pelvis helped make the bodies look emaciated.

The arm and leg joints were attached with a thick woven tape made of cloth and staples. We dressed them in clothes selected by the designer — she chose them to match a certain colour palette.

They had to be very natural-looking because they were dug up during each performance from a pit built in the deck. The bodies were buried in sawdust dyed to look like dirt — some other people dyed the sawdust.

We broke them down more than this (the way they look in the picture), and naturally they got a bit more battered during the run of the show.

Unfortunately, I don’t have a picture of the electric chair, which was made by someone else.