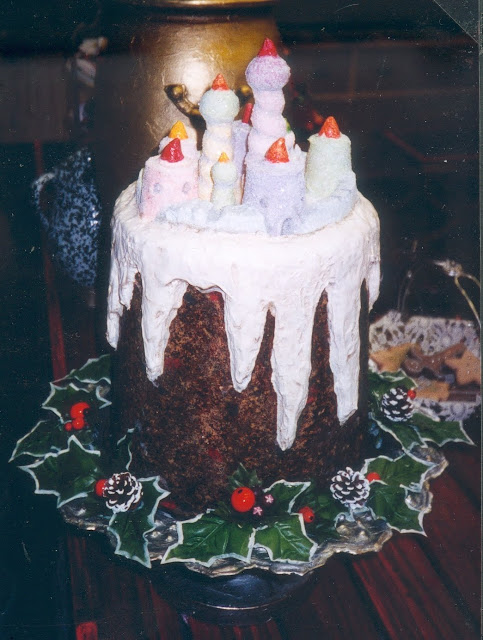 This cake for a production of The Nutcracker ballet was a group effort.  We were provided with a blueprint outline scale drawing by designer Santo Loquasto’s assistant to create the table of treats below. It was up to us to fill in the blanks, which made it a lot of fun as we got to decide what to make.

All the treats we made were adhered to a table top which could be carried out on stage during the Christmas party — all the desserts had to move and wobble.

The designer made only one visit to the prop shop from September to December when we worked on the show as far as I can recall. We had free rein — when he did show up, he liked everything we had made.

I had the pleasure of painting, icing and decorating the cake — someone else created it.

I used thick white fire retardant for the white icing. After painting the spires, I made a watery mix of glue and water. I sprinkled regular craft sparkles on it to make it glisten. I painted the pudding part with acrylic paint.

I created holly leaves by cutting shapes out of regular artificial leaves, and then painted the edges white. I used hot glue to stick them around the plate.

One of my colleagues created the shape of the cake using various types of foam, another created the plate and did breakdown on it so it wouldn’t be too shiny on stage. Someone fixed it so it would pivot and move. 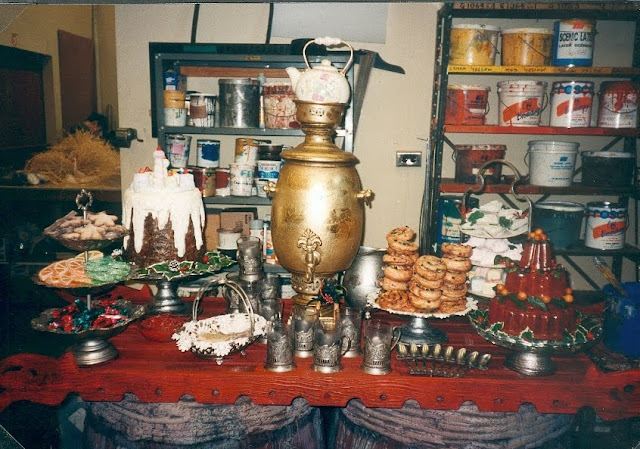 One ingenious colleague — Wulf — made the samovar using various bowls.

The spigot — made from a piece of wooden molding — has a spring in it so it can be pulled forward as if it is pouring.

The same colleague also made the jelly out of resin and decorated it. Each jelly section is on springs so it wobbles. He also made the citrus jellies and the wrapped candies.

He did the breakdown on all the metal dishes so they wouldn’t be too shiny under the stage lights. He also attached the spoons to a piece of Plexiglas so they would remain in place when the table top was carried out on stage and placed on the large barrels.

The carpenters made the table and barrels. 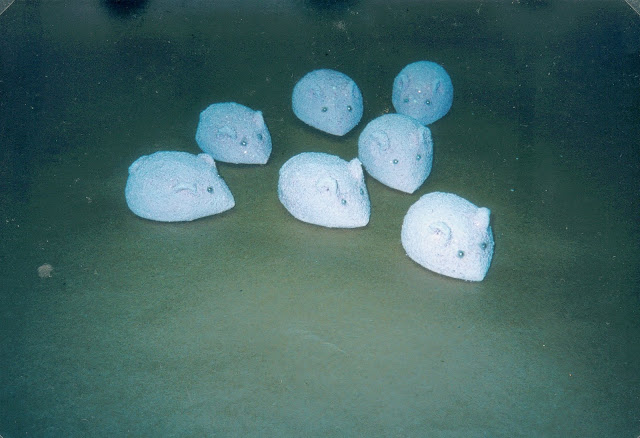 I made these sugar mice by carving them out of a hard, dense foam I found in the prop shop. I painted them pink and added silver beads for eyes.

First the tear drop shape was cut out on the bandsaw. You can see them in their final state on the plate below. I made their tails out of a bit of hot glue “painted” on in a swirl. Wulf made the cucumber sandwiches and rigged the plates so they would tilt back and forth. I made petit fours out of foam and then iced them by adding colour to the thick fire retardant I had used to ice the cake. The decorative colours are painted bits and swirls of hot glue.

The cookies below I carved out of the same foam as I used for the mice. I dyed the ginger bread men brown with French Enamel Varnish (leather dye, alcohol and shellac) and used white hot glue for the icing. For the shortbread stars and trees I painted the edges dark brown for definition on stage. The sparkles on the trees are just craft sparkles painted on with a bit of thinned down white glue. 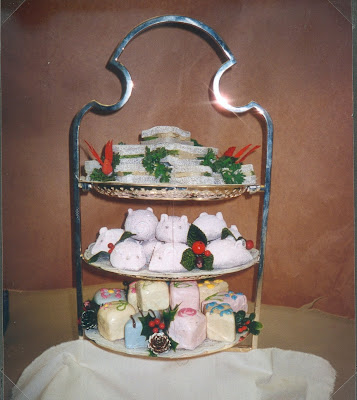 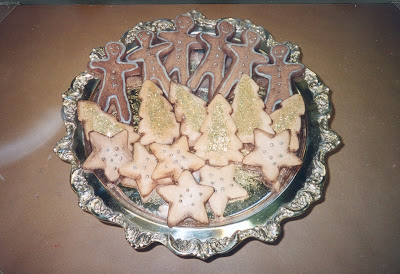 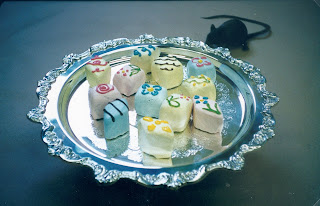 The sticky buns were tricky. I made them out of foam rubber. I carved long rounded strips and then glued them together with water soluble contact cement that had brown paint mixed in. They took a long time to dry.

I had to make these so they would wobble, so the top buns I sliced in half as if to toast.

Wulf and I used thick elastic pushed through plastic discs glued into the sliced buns to create the tension at the top of each stack. We drilled through the plate and knotted the elastic at the other end.

He made the green and red fruit bits out of resin. We used brown faceted plastic beads for the raisins. I used FEV to dye the foam the colour of toasted sticky buns. These all turned out very well, but they took a long time to make. 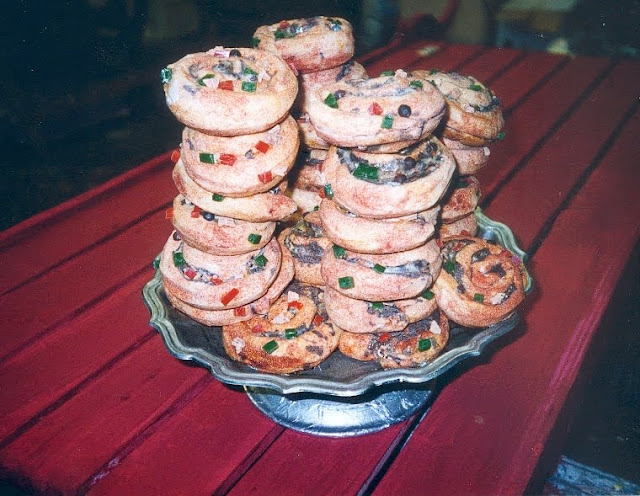 Beyond the sweet treats, there were platters of broccoli and other vegetables. The broccoli was made by taping around ethafoam and gluing that into a painter’s sponge. Then the pieces were dipped into water soluble contact cement with green paint mixed into it and hung to dry. After they dried out, I painted highlights on the pieces. 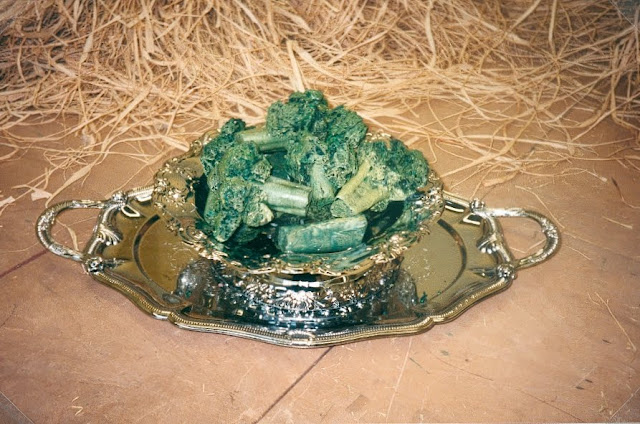 These were glittery ends to go on staffs held by the unicorns in the ballet. We glued sparkly bits onto filament and then glued the filament onto clear plastic balls. We also glued the bead strands onto them. We glued and attached everything to the poles. 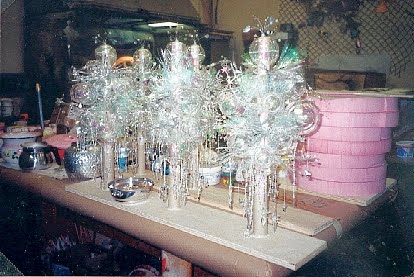 These evergreen boughs below were a bit of a nightmare to make — the greenery scratched my hands, so it was painful.

I worked from blueprint drawings to scale the branches to the right size so they would fit into particular places on the large stage at the O’Keefe Centre, now the Hummingbird Centre.

After doing that, the green boughs had to be attached to the ropes and armatures. The plastic fruit had to be painted and attached too. We didn’t want it to look like cheap, plastic store bought fruit, so we painted it.

I had to do a lot of measuring to ensure the fruit was distributed evenly. It was a great relief when I was pulled from this job and started making sweet treats instead. 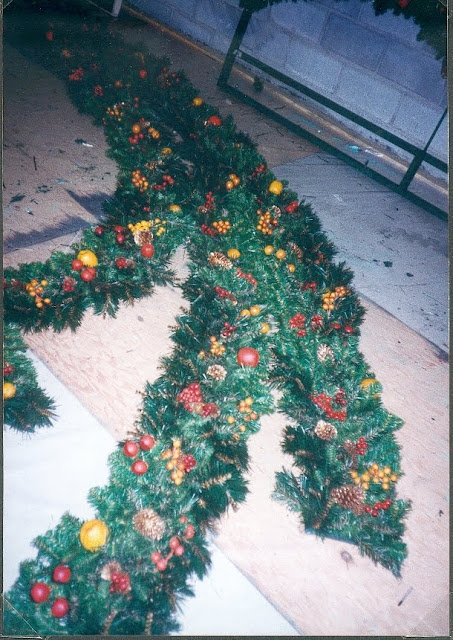