Share this on WhatsApp
– University of Toronto Theatre Centre –
2000 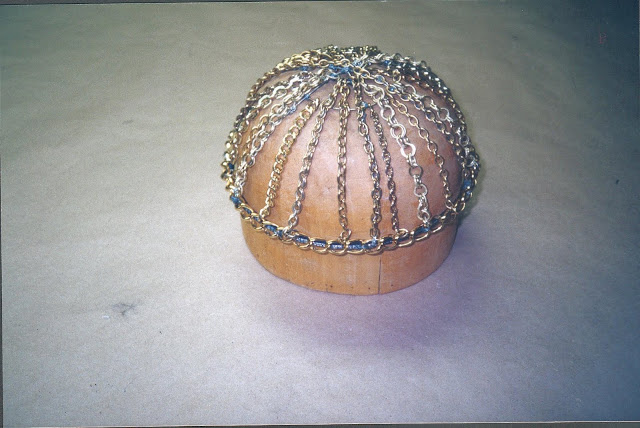 I made this beanie for the Clairvoyant. I also helped create the set, which was made partly of bubble wrap taped together in large pieces.

Designer Ed Kotenan drew a picture of what he wanted — basically a chain beanie in the shape as shown above — and I had to figure out how to make it work. I created the armature — seen quite clearly in the picture — out of wire. It wouldn’t have shown on stage when on the actor’s head nestled in his hair. This production played at the small Studio Theatre on the University of Toronto campus.

I wired and glued it together after trying it on the actor to ensure it fit. Then I selected different bits and pieces of chain from boxes of old jewellery and odds and ends at the theatre. I had added two wire circles in the basic armature so that I could drape the chains down from those and not end up with a lot of bulk at the pinnacle.

The chains attached to the lower ring I didn’t adhere in place so there would be some movement in the piece.