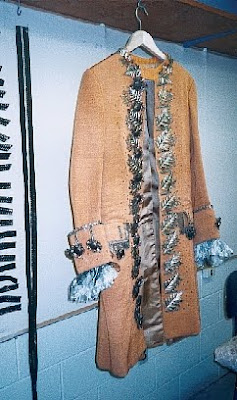 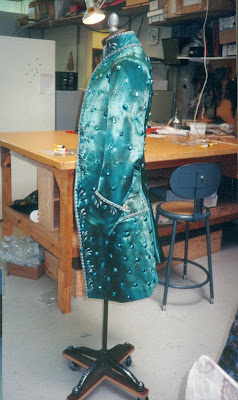 Amadeus was the first show I worked on at the Stratford Festival. I did not sew these costumes, but I made the frills (ruches) that went under the buttons on the footman’s coat on the left.

I made a lot of lanyards for Amadeus costumes too. I sewed lots of decorative piping for the lanyards — lace over a thick black cord.

The costume on the right is one of Amadeus’ costumes. Amadeus was played by Stephen Ouimette. All I did was help sew the gems onto it. someone else had carefully measured out where they should go and I sewed them on with one of my colleagues.

For the ladies costumes, I made rosettes for the fans.

Mainly I made dozens of ruches for buttons and lots and lots of lanyards. It was very repetitive work.