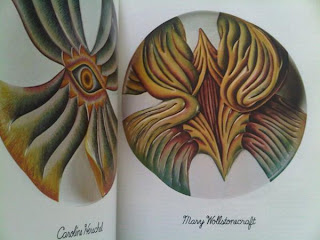 Mary Wollstonecraft‘s book “A Vindication of the Rights of Woman” was published 220 years ago this week on February 23, 1792. It posits that women are entitled to a proper education and to the same rights as men.

To mark the event, I took this photograph of a plate designed by the influential feminist artist Judy Chicago for “The Dinner Party” — a 1970s art installation — from an image in a book of the same name. The plate is a conceptualized image of 18th-century feminist Wollstonecraft.

The interpretive works were set out on a triangular table and accompanying embroidered runners further illustrated important aspects of the women’s lives. Another 999 women of achievement were memorialized on the floor.

The women selected for representation in “The Dinner Party” were those who “had fought to make themselves heard, fought to retain their influence, attempted to implement or extend the power that was theirs, and endeavored to do what they wanted,” Chicago wrote.

“I thought images on plates would convey the fact that the women I planned to represent had been swallowed up and obscured by history instead of being recognized and honored,” wrote Chicago.

Chicago had originally conceived the art project as a series of 100 plates to be hung on a wall, but eventually decided to create a dinner party installation.

“Each woman is herself, but through her can be seen the lives of thousands of other women — some famous, some anonymous, but all struggling … to have some sense of their own worth through five thousand years of a civilization dominated by men,” Chicago wrote.

The picture below represents Wollstonecraft dying of childbirth fever after giving birth to her daughter Mary Shelley, who in adulthood wrote the novel “Frankenstein”. 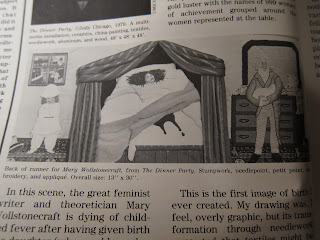 “The Mary Wollstonecraft image for the back of the ‘Dinner Party’ runner prefigured my interest in the subject of birth and creation,” Chicago wrote in her 1985 book, “The Birth Project“.

“It was an image that frightened me when I did it because it was so raw and graphic,” Chicago wrote.

When I was primarily a painter and artist, I read Judy Chicago’s books, Wollstonecraft’s “Vindication”, as well as other feminist philosophy on art and women’s role in society in general. I also read a lot of women’s literature.

Virginia Woolf’s 1929 “A Room of One’s Own” stands out as the most memorable and serves both as a hub and framework for all the other ideas and concepts.